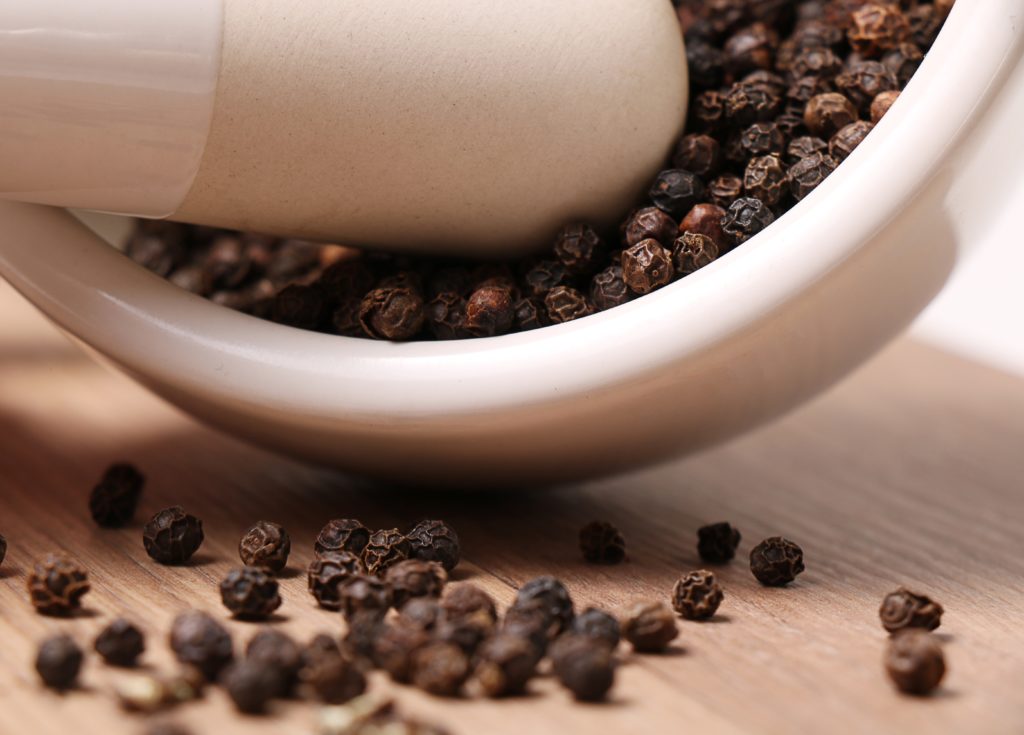 Well, now that the new year is fully underway, it’s about time to sprinkle a whiff of weedy science onto the Cannabis Information Centre blog once more. Today, my ever-greedy students, we are discussing one of the most spicy terpenes out there: caryophyllene, to be precise.

So, as you may or may not know from some of our earlier posts, terpenes are the main cause of the wealth of flavours that make the world’s weed strains so rich and diverse in taste and aroma. They’re a quite recent topic of interest among researchers, too. Whereas the focus in cannabis science used to be on THC, other components of the plant have steadily gained interest. Other cannabinoids such as CBD and THCV, for instance, were gradually acknowledged as adding something of their own to the mix. All the various terpenes are also known to make contributions to the many different subtleties in the highs we experience when we smoke, eat, or vape our favourite marijuana variants.

The Spice Of Life

Terpenes are by no means unique to the cannabis plant, though. They are present in just about any plant out there; especially in the ones we like to eat. If you’ve ever wondered what makes a lemon taste so, well, lemony, that’s a terpene called limonene. Pineapple kush tastes kind of like – you guessed it – pineapple, don’t you think? Quite rightly so, and that’s because of another terpene called pinene. Over one hundred different terpenes have now been identified in cannabis strains, and not all of them have such obvious names. There’s myrcene, humulene, and terpinolene, for example. Different concentrations and combinations, called terpene profiles, make up the unique spice of life that comes with your favourite weed, but terpenes amount to much more than just a matter of taste…

Caryophyllene: A Flavour All Of Its Own

Before turning to the broader effects of today’s terpene topic, however, let’s get a taste of caryophyllene itself. To be honest, once you get a whiff, you’re bound to recognise it anywhere. That extends far beyond holding your nose over a baggy of fresh weed, because caryophyllene is many a chef’s favourite all over the world. This terpene codetermines the flavour and scent profile of pepper. You know the spicy, pungent aroma that hits you right between the eyes when you get busy with your pepper mill in the kitchen? That’ll be our terpene of interest caressing your olfactory nerves (sense of smell).

It’s In More Than Just Pepper

Caryophyllene isn’t in just weed and pepper. It is found in many other spicy herbs and plant or vegetable parts. You can trace it in oregano, for instance, and in cinnamon, cloves, and hops. Basically, if something in your kitchen packs a punch and brings that extra bit of oomph, you can safely bet there’s caryophyllene involved at some molecular level. Like many other terpenes found in cannabis, this one is frequently splashed into the essential oils used in aroma therapy. And speaking of therapy, let’s see what else caryophyllene can do besides adding heat to our weed.

To understand the effects of caryophyllene, you need some basic insight into how the human nervous system works. Our nervous system is like the wiring of our bodies, in which nerves work like the wires that allow electrical currents to run through a machine. Nerves are, of course, made of biological matter rather than of the copper wire found in most machines. They transmit signals across the body using a host of different chemicals known as neurotransmitters. These neurotransmitters operate in the space between nerve ends, called synapses. Neurotransmitters allow a signal to travel from one nerve cell to the next, all the way through the body. They act like little keys matching specific keyholes, in a sense. These keyholes are called receptors, because they receive the neurotransmitter they were designed for. With that in mind, we’re ready to move on to the specific role played by caryophyllene.

CB2 Receptors in the ECS

Caryophyllene works by attaching itself to a very specific keyhole, or receptor, in a special part of the nervous system called the endocannabinoid system or ECS. This ECS is important in regulating the balance in your body, and it’s also the place where THC and CBD do their respective jobs. Now, caryophyllene attaches to a specific type of ECS receptor known as CB2, rather than the CB1 receptor connecting with the THC and CBD cannabinoids. As far as we know, caryophyllene is unique in this CB2 compatibility, which gives it unique abilities related to our health. The ECS extends all the way throughout the human body, but whereas CB1 receptors are located mainly in the brain and the central nervous system, CB2 receptors are found mostly in other organs. That is why caryophyllene is known to have medicinal properties. These affect the way our organs do their jobs, increasing or decreasing their activity, or releasing higher or lower concentrations of active substances into our bloodstream.

A High Potential Terpene Without The High

Instead of contributing to any type of high – which is caused by the CB1 receptors – caryophyllene is being studied for its high potential to treat medical conditions. Its effects on the peripheral organs of the body are diverse and not yet fully understood. Early results are very promising, however. Although studies on human test subjects are not widely available, researchers have shown interesting effects in mice and lab rats so far. Caryophyllene has been targeted as a possible treatment for depression and anxiety – a huge area of potential benefit for the global population, as many people suffer from one or both of these conditions. But the list doesn’t stop there.

Spicing Up Your Life – For Real!

Apparently, caryophyllene is able to reduce stress levels, providing a soothing, relaxing effect by affecting the ECS. In mice populations, it has also been shown to bring pain relief. The ability to reduce pain would definitely be another great gift to humanity. This becomes even more evident when you think of all the recent problems we’ve seen surrounding the use of synthetic opiates for pain treatment. Beyond this already impressive list of possibilities, it is also being studied for uses in treating inflammations – another huge medical problem. Caryophyllene also works as an antioxidant, which can help protect the cells in the body from harmful outside-world influences. Last but not least (as if the above is not impressive enough), caryophyllene is even suspected to protect our genes from getting damaged as we grow older, thereby possibly offering a way to live longer, healthier lives. How’s that for spicy terpenes spicing up our lives, eh?

Time to conclude my rant, I see. I hope you understand why I’m so fired up about this flaming little terpene. If you want to add some spice to your own smoking experiences, you should look for caryophyllene in some well-known strains sold at your local cannabis outlet. Famous caryophyllene-rich weed variants include Sour Diesel, Master Kush, and most of the Cookies strains out there. If you’re not sure which one to pick, ask your vendor for advice. Anyway, this is your Professor signing off for today: happy highs to all of you, and let’s get back in touch soon!

Very Much Yours, Professor Harvest