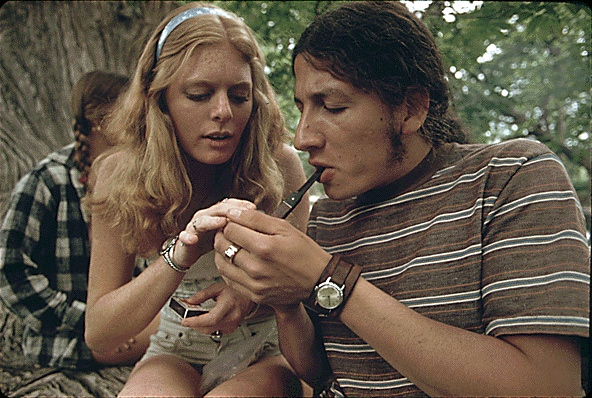 If your parents were part of the hippie generation, or came around after that, chances are they will have smoked weed at some point in their lives, even though they may never admit it. Those who do talk about their past smoking adventures, however, can often be heard complaining about how today’s weed is nothing like the stuff they used to get high on. Now, it can generally be observed that all generations nag about how things were better when they were young, but on the subject of cannabis, they may have a point. Today’s herb appears significantly more potent than the grass smoked at Woodstock, or even Live Aid for that matter. In this article, we try to figure out what happened, and whether your folks are likely to pass out the stuff you get to smoke today…

On The Origin Of Reefers

Let start out with some basics in evolutionary biology. The natural world around us is shaped in large part by the forces of evolution. This mechanism, first described in 1859 by Charles Darwin in his revolutionary work On The Origin Of Species, naturally selects individual plants and animals that are better adjusted to their environments through increased likelihood of passing on their genes to future generations. This applies to all (plant) species, including cannabis sativa – the plant we love. There is debate on the pace at which natural selection operates, but it generally happens too slowly for us humans to notice. Nonetheless, cannabis has changed considerably over the past few decades – far faster, in fact, than natural selection could possibly account for. So what’s been happening to our weed lately?

First of all, it’s moved a lot closer to our homes. Back in the sixties and seventies, most of the available weed was grown in Southern American, Northern African, and Southern or Western Asian countries – far away from Europe and North America, that is. Since THC content decreases over time when harvested plants are exposed to air and sunlight, this meant that old school weed was pretty degraded in terms of potency by the time it hit our western markets. These days, anyone who cares to watch a few YouTube videos can grow their own weed at home, so current cannabis tends to be much fresher, and therefore richer in THC content.

Another reason is plant material quality. Back in the old days, the pot people smoked used to be a blend of flower buds, leaves, and stems, i.e., pretty much the whole plant chopped up and mixed together. As only the flowers of the female plant contain high levels of THC, this meant that people smoke more ‘grass’ (actual rabbit feed, that is) in each joint, and less of the resin glands that get us high. Today’s weed we get from coffeeshops and other dispensaries tends to consist mostly of glistening flower buds, so pound for pound, we get a lot higher on the modern version.

Probably the major factor in today’s high THC levels, though, is a combination of crossbreeding and crop cultivation. As more and more people decided to grow marijuana on the spot, aided by techniques such as hydroponics and high-intensity lighting, they developed new strains by experimenting with what they had available. Over the years, growers got more professional and so, ever more potent strains became available for new crossbreeds. As a result, THC content started to skyrocket. Ironically, in a sense, this is the very same reproductive mechanism that powers Darwin’s evolution, only now, the process has been highjacked for commercial and recreational purposes. It has been estimated that THC levels were at about 1% in the good old sixties. These days, levels ranging anywhere between 5 and 10% are pretty common, with certain strains reaching far beyond that.

So yes, it seems safe to conclude that today’s cannabis is substantially different from what your folks or grandparents may have smoked. The original question of whether they would pass out if they snatched some of your stash is trickier to answer, though. If they decided to be optimistic and go full flower power, you may well find them passed out in a corner still wearing their purple shade sunglasses, tie-dye shirts and bandanas. On the other hand, if they were to read this article first, they might opt to get smart before getting high, and take just a few puffs to see how it plays out.

Of course, this places the heavy burden of responsibility squarely on your shoulders… As a modern smoker and sensible (near) adult, will you warn your mum and dad about the new generation of ganja, or do you simply wait for them to turn on, tune in, and pass out, camera ready for priceless blackmailing material? It’s all up to you, but perhaps it’s about time to have ‘that talk’ with your folks…